Release of liability for an employee

It is very important to write your letter carefully. The modele2lettre guide gives you advice on how to write a model letter %variable%. Continue reading this page for more information. 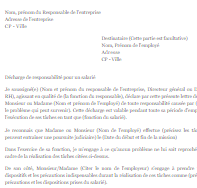 An employee release is a letter written when an employee is released from an obligation or certain problems related to his or her job. Originally intended for military use, discharge letters are becoming increasingly common in the business world. They differ from termination letters, which are generally used in cases of misconduct. A letter of release can be used by the employer to avoid concern if something goes wrong. The employer, before issuing a letter of release, must ensure that all details have been clarified between the two parties, such as the employee's position, the problems that may arise and the employee will not be held responsible. Sometimes and depending on the circumstances, the employer may put a phrase that waives the employee's right to legal action in the event of an accident. In order to understand the meaning of a release letter for an employee, let's take a simple example. When installing an alarm system at a customer's premises, the employer can sign a letter of release with the employee so that the latter is not held responsible for the malfunctioning of the device caused by an old electrical installation or by improper use of the device. In this case, the employee is protected from any legal action that may arise.
▼ Display the suite ▼

Below is our sample letter template:

Recipient (This part is optional)Name, First name of the employeeAddress
CP - City
I, the undersigned (Name and surname of the person in charge of the company, General Manager or HR Director), acting in the capacity of (the function of the person in charge), hereby release Mr. or Mrs. (Name and surname of the employee) from any responsibility caused by (specify the problem that may arise). I acknowledge that Mr./Ms. (Name of employee) is performing (specify the tasks that may result in legal action) on (Date of start and end of the assignment). In the performance of his or her duties, I undertake that no problems will be attributed to him or her in the performance of the above-mentioned tasks.For his part, Mr./Ms. (Name the employer) undertakes to take all necessary precautions and measures during the performance of these tasks such as (specify precautions and measures taken by the employee).As the employer, I recognize the risk involved in the performance of these duties and in order to protect and respect the rights and safety of the Employee, I hereby confirm with this letter of release that the Employee will not be held responsible for the (specify problem) in the course of his/her duties. Dated at (location), on (date)
Your signature

Do you want to use this model?