Letter of declaration of non-polygamy

It is very important to write your letter carefully. The modele2lettre guide gives you advice on how to write a model letter %variable%. Continue reading this page for more information. 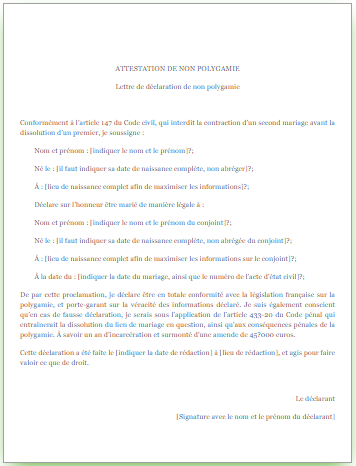 Polygamy refers to the fact that one spouse aspires to take more than one spouse in a marriage. This can occur in the union of two people who have no marital status on French soil. This type of situation is formally prohibited by French law under Article 147 of the Civil Code. Article 147 of the Civil Code stipulates that a person legally married cannot enter into a new union and therefore a new marriage without the first one having been dissolved by divorce proceedings. Any person in irregularity is under the application of the article 433-20 of the Penal Code and risks one year of prison with a fine amounting to 45?000 euros. But also that any false declaration will result in a permanent sanction. Thus, in order to be able to enter into a new union, a declaration of non-polygamy is required from people who have already been married before, but especially from foreigners who want to be united on French soil.
▼ Display the suite ▼

Below is our sample letter template:


CERTIFICATION OF NON-POLYGAMYLetter of declaration of non-polygamy In accordance with article 147 of the Civil Code, which prohibits the contracting of a second marriage before the dissolution of a first one, I, the undersigned:Name and surname: [indicate name and surname]? [give full date of birth, not abbreviated]?;At: [full place of birth to maximize information]?;Declare on my honor that I am legally married to:Full name: [give spouse's first and last name]?;Born on : [indicate spouse's full, unabbreviated date of birth]?;At: [complete place of birth to maximize information on spouse]? [indicate the date of the marriage, as well as the number of the civil status certificate]?;By this proclamation, I declare to be in total conformity with the French legislation on polygamy, and guarantee the truthfulness of the declared information. I am also aware that in case of false declaration, I would be under the application of article 433-20 of the Penal Code which would lead to the dissolution of the marriage bond in question, as well as the penal consequences of polygamy. This declaration was made on [indicate the date of drafting] at [place of drafting], and I act to enforce what is right. The declarant [Signature with the name and surname of the declarant].

Do you want to use this model?